"The cave is situated in the cliff face immediately west of the headland on the western side of Hunts Bay and is approached without great difficulty by a steep, well-defined path, which descends from the cliff plateau. The large seaward facing entrance is largely block by a great mass of cemented breccia up to 28 ft. thick, which leaves an opening about 60 ft. wide and 20 ft. high. Towards the rear of the main chamber which is about 120 ft. long and on the right-hand side is a small, dark chamber about 25 ft. long and 10 ft. wide. It was inside this chamber in 1912 that Prof. Sollas and the Abbe Breuil discovered ten wide red bands, almost horizontal and roughly parallel, arranged in a series about 3 ft. high and covered with a thin layer of stalagmite. Breuil suggested that the marks were the work of Palaeolithic man and the discovery created considerable controversy. The local people claim another origin....." 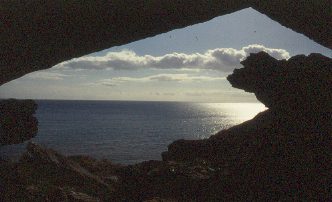