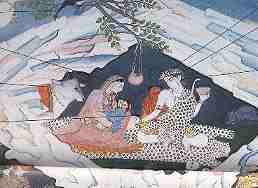 A painting of Shiva and Parvati in the cave?

or "who has seen Shiva, has eaten from the sun..."

The cave of Amarnath lies in Jammu and Kaschmir, nowadays the northern province of India. 3 bus hours away from the provincial capital of Srinagar the road finishes in Pahalgam. From there you have to walk.

Every year in August, 3 days before full moon, thousands of Hindus walk up from here into the foothills of the Himalayas to the mythical residence of Shiva. The cave is situated at 3882 m, "halfway" to the gods. In it, as legend has it, the god revealed to his wife Parvati the secret of immortality 3000 years ago. It is said that she had been already too tired from the long walk, that she didn't get the message. A pair of pigeons overheard the talk and their predecessors still fly around in the cave and talk of the secret of eternal life.

The main attraction in the small cave is a small ice pillar, the "ice-lingam", which grows "with the waxing moon" and decreases when the moon is on the wane. This change is considered as a sign for the "life" in the ice stalagmite. To touch it means to heal illnesses, to die in peace and to enter quicklier Nirwana.

For many years the holy cave was forgotten. Only 200 years ago it was rediscovered by a hiking shepherd and since then the processions took place. Because he was a Muslim, the belief didn't really concern him but his predecessors still profit from his find. They receive a quarter of all the sacrifices from Amarnath and it is said that is a quite a lot. The entrance is gated nowadays and the access is controlled by police. Every 5 minutes a group of about 150 pilgrims may pass the small entrance to the cave. The others spend the waiting time trying to catch the drops of water with their open mouth, which fall down 50 meters - holy water which also flows over the lingam.

Most of the visitors would like to touch the ice pillar with their hands and their forehead, to press the mouth on it, but the pillar is defended against all these action by Sadhus. Yellow flowers rain on the ice, coins, pearls, clothes and rice are thrown. Infertile women pray for the desired pregnancy. 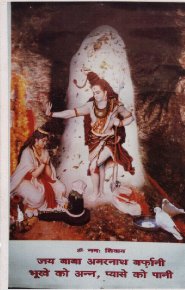 There are surprisingly many INTERNETLINKS related to this cave.