This relatively small cave in the Lower Altmuehltal in Bavaria has always been known to human beings because of the easy access and the well-known entrance. The archeological finds from the pit near the entrance date back thousands of years. A roomy tunnel ended after 50 meters at a mud choke, which reached up to the ceiling.

In the 60's cavers from the Oberpfalz dug themselves through and found a wonderful, completely untouched part with many pristine formations. It remained like that for a few years while information was only spread among a small group of trustworthy cavers. One day some members of an important Bavarian caving club guided the Bavarian television to the cave and initiated to create a film about one of the most beautiful caves of Bavaria at that time. The result was devastating.

After the transmission many people went to the unprotected cave and took what they wanted. Almost all stalactites and stalagmites are now destroyed, the floor trampled all over, the walls smeared with red graffiti. A very sad chapter of missing cave protection conciousness and extremely fitting into our present way of life. 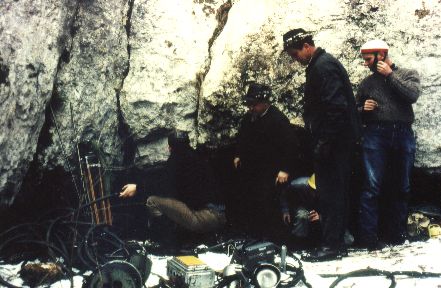 A shot of the TV action - initiated by Karl Thein